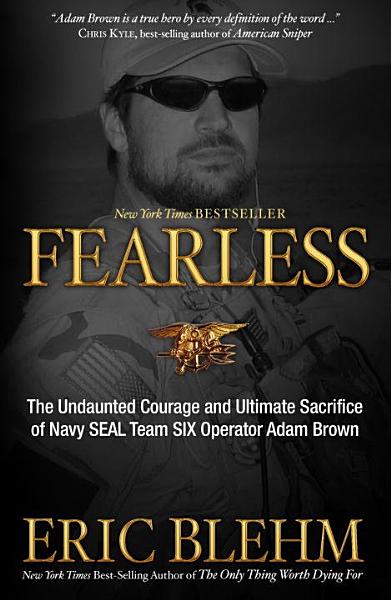 A New York Times bestseller with over 450,000 copies sold, Fearless takes you deep into SEAL Team SIX, straight to the heart of one of its most legendary operators.

When Navy SEAL Adam Brown woke up on March 17, 2010, he didn’t know he would die that night in the Hindu Kush Mountains of Afghanistan—but he was ready: In a letter to his children, not meant to be seen unless the worst happened, he wrote, “I’m not afraid of anything that might happen to me on this earth, because I know no matter what, nothing can take my spirit from me.”

Long before Adam Brown became a member of the elite SEAL Team SIX—the counterterrorism unit that took down Osama bin Laden—he was a fun-loving country boy from Hot Springs, Arkansas, whose greatest goal had been to wear his high school’s football jersey. An undersized daredevil, prone to jumping off roofs into trees and off bridges into lakes, Adam was a kid who broke his own bones but would never break a
promise to his parents.

But after high school, Adam fell in with the wrong crowd, and his family watched as his appetite for risk dragged him into a downward spiral that eventually landed him in jail. Battling his inner demons on a last-chance road to redemption, Adam had one goal: to become the best of the best—a U.S. Navy SEAL.

An absorbing chronicle of heroism and humanity, Fearless presents an indelible portrait of a highly trained warrior who would enter a village with weapons in hand to hunt terrorists, only to come back the next day with an armload of shoes and meals for local children. It is a deeply personal, revealing glimpse inside the SEAL Team SIX brotherhood that also shows how these elite operators live out the rest of their lives, away from danger, as husbands, fathers, and friends.

Fearless is the story of a man of extremes, whose courage and determination was fueled by faith, family, and the love of a woman. It’s about a man who waged a war against his own worst impulses and persevered to reach the top tier of the U.S. military. Always the first to volunteer for the most dangerous assignments, Adam’s final act of bravery led to the ultimate sacrifice.

Adam Brown was a devoted man who was an unlikely hero but a true warrior, described by all who knew him as fearless.